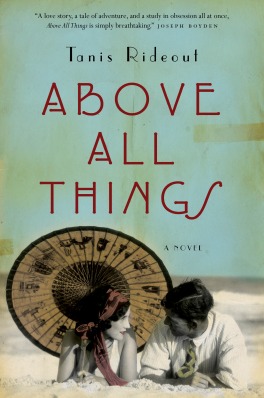 Summary: George Mallory has been to Mount Everest on two climbs but his teams have never reached the summit. When the chance for a third expedition comes his way, Mallory is willing to drop everything to be the first to the top. George’s wife Ruth is less than pleased that her husband is willing to risk his life again for the sake of fame and glory. Above All Things chronicles Mallory’s climb to the top and Ruth’s attempts to cope with her husband’s absence.

This is a stunningly beautiful story of love and passion. To me, Above All Things shows love in a much more real light than in many historical novels — it’s made clear that Mallory loves Everest almost as much as he loves Ruth. Rideout‘s writing is crisp and clear, putting you right in the center of the Everest climb. This book was so close to receiving 5 stars but ultimately I couldn’t get behind the way that Rideout alludes to an indiscretion Ruth has while George is away. It felt as though there was so much more to say there and the storyline didn’t have room to breath. That being said, Above All Things should go straight to the top of your must-read pile for its imagery and love story. It would make the perfect Valentine’s read.