Last week the NYU Summer Publishing Institute was really intense! Because it was the final week for the magazine section, we had to put together our launch plans and presentations. This meant more than our fair share of late nights and working lunches but it turned out amazingly well! I’ll show you my group’s work in a later post but here’s a recap of how it all happened:

We were in strategy workshops all week which of course sounds far easier than it actually was. Rather than just working within our groups or with professors, every day we had to present our ideas to industry professionals such as Lavinel Savu (Managing Editor at InStyle), Tom O’Quinn (Art Director at Men’s Health) and others. Not only was this intimidating but in many cases it meant we needed to revise large sections of our project mere days before presenting!

In the midst of all of the preparation I managed to snag tickets to Shakespeare in the Park, quite a feat just ask any New Yorker! I was worried to loose a whole night of work but couldn’t pass up the amazing opportunity, plus this year they are performing As You Like It! I spent more than an hour wandering the park looking for the theatre in my work clothes! It was all worth it though. The players were sensational, but what can you expect from a cast that includes Lily Rabe and Oliver Platt? (If you don’t believe me listen to the NYT). 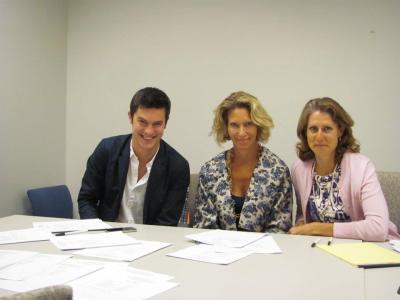 When Thursday finally came I felt ready. Our fashion/beauty magazine was gonna rock their socks. We were up against a tough panel: Brandon Holley (Editor in Chief, Lucky), Matt Sullivan (Web Director, Esquire), Christine Guilfoyle (Publisher, Every Day with Rachael Ray). Though I know we worked our hardest, we didn’t win the competition. However, we did get an award for best app concept!

This weekend was the quintessential NYC experience. Saturday morning I went to the Metropolitan Museum of Art to take in the exhibits. Though the layout is very confusing I managed to explore three exhibits that I found particularly thrilling: Schiaparelli & Prada: Impossible Conversations, The Dawn of Egyptian Art, and the Wrightsman Galleries for French Decorative Arts. Vastly different in time and space, the three caught my eye because of their beauty, intelligence and complexity. Schiaparelli & Prada was the perfect balance of beautiful clothes and intelligent dissection. The Dawn of Egyptian Art was a new way to look at my love of Egyptian burial rites. The French Decorative Arts were like Versailles only far less crowded  and,  to a certain extent, more interesting.

A bracelet that fits my impossibly tiny wrist!

While there I purchased a unique bracelet based on a Tibetan dragon.Three hours later I emerged with a notebook full of observations and a growling stomach.

Alice’s Tea Cup (on 81st) was just the ticket. I was lucky enough to be seated immediately and to get a table right in the window!(People watching in NYC is my not-so-secret hobby.) After pouring over the menu for ages I finally decided on the Breakfast Tea with Anna’s Earl Grey. The food was more than I could eat but I tried my darndest because it was so delicious!

There’s nothing quite like relaxing with a cup of tea and a great book.

Once I tore myself away from my current read, I met up with my roommates for gossip and mimosas at Tonic East. Wonderfully relaxing and the perfect afternoon pick-me-up, Tonic was the motivation I needed to dig in to the job hunt.

Sunday began in much the same way with brunch at the Sunflower Diner. The food was mediocre but the atmosphere was adorable and I saw the most amazing array of New Yorkers! Next up was the mundane task of grocery shopping, jazzed up with the help of my roommate and Trader Joes. There’s nothing like a great grocery to perk you up! Continuing with the adventure, we headed to Central Park for a little reading and a lot of sun.

Everyone enjoying the nice weather.

The perfect weekend ended with a trip to Atlantic Grill. Though we found it while wandering to the subway, I’m glad we stumbled across this gem! The food was divine, better than anything I have had in NYC thus far. I had the salmon and spinach; Lauren had sushi. Afterwards we split chocolate fondue — yum!

I’m only sorry I didn’t get a picture of the fondue!

Check out my other NYC posts: