First off I’d like to apologize for not posting for a few weeks. School has really revved up and I’m spending more and more time working on group projects! I have a few posts lined up for the next few weeks but before I get to book reviews and library school discussions, I wanted to do a quick post on a subject that is close to my heart: children’s literacy.

My passion for children’s literacy is no surprise to those who know me. Reading is such an integral part of who I am — I can remember what book I was reading during almost any major life event. More than that, my love of literature and my passion for literacy are the reasons why I chose to pursue my master’s in library science!

This summer I had the opportunity to visit Books of Wonder in NYC and listen to Peter Glassman talk about how children’s books are an important piece development (check out my posts about my stay in NYC here). By the end of the morning Mr. Glassman had all of us in tears! BOW is such a great resource for children in NYC; they hold author events, readings, special parties and volunteer at the local children’s hospitals. There’s something magical about walking in to Books of Wonder — a little like crossing into Narnia!

Needless to say, when I heard Books of Wonder was in trouble I was shocked! Here’s a little video about what happened:

Did that video break your heart like it did mine? Check out the link below to help them if you can.

Even though I haven’t posted about the final two weeks of the NYU Summer Publishing Institute yet, I couldn’t wait to share my Book Project. As with the Magazine Section, I was put in a group to complete the launch project. This time we were supposed to create an imprint, complete with Profit & Loss statements, comparative titles and book covers. My role was Sales Director, which meant that I was responsible for the comp titles, sales placements and the announced first print numbers. While it was a completely new role for me, I was happy to have the chance to learn new skills!

Two Roads Press is an instructional lifestyle imprint for the transitional periods of life. We publish guides that are both fun and entertaining to help improve your life through design, cooking, crafts and more during times of change. Whether you’re having your first child or moving across the country, when two roads diverge before you, Two Roads Press has a guide to help you maximize your new lifestyle’s potential.

Our imprint came up with three titles for our first catalog (Spring/Summer 2013). Here are the book covers that our wonderful art director came up with!

Note: As with the previous post, these covers were developed for education purposes. I do not own the images.

Check out my other NYU Publishing Institute posts:

The keynote speech was given by Markus Dohle of Random House. Though he is relatively new to publishing he really made all of us excited to enter the industry.* He spoke about how the industry is changing in really exciting ways – from ebooks to what comes after them. After Dohle’s speech he took a picture with us to use in future presentations. 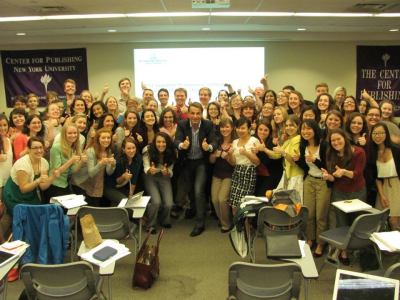 On Tuesday we heard from several agents about their role in the book publishing process. I had no idea how important they were! So much of what I thought editors did is actually the agent’s job: first edit of the manuscript, marketing the book, convincing a publisher to take the book, etc. Later that day we had small sessions with editors where we got to review sample first draft manuscripts and discuss whether the author was right for a particular imprint. I learned that sometimes the story is more important than the writing – writing can be fixed but a story that goes nowhere cannot.

Wednesday was the first field trip day and we started with the best! Barnes and Noble at Union Square opened early just for us so that we could speak to the major buyers. Buyers at B&N are some of the last left in the industry who buy in large quantities (see demise of Borders). This means that these people make or break a book’s sales – scary! They are the real taste makers of the book world, even more than the “almighty editor.”

Children’s books started off our Thursday morning. The professionals who came to visit were so passionate about what they do and who their market is – so much more interesting than some of the previous talks! I was swept away by the idea of children’s publishing, as you’ll see in the week 2 roundup post! I also met with a Kenyon Alumni Network content on Thursday. The KCN rocks!

I spent the weekend hanging out with my cousin in Bedford, NY so I don’t have any fun pictures to show you. I promise there are lots of images for week 5!

*The program leaders (Libby and Victoria) have a bit of a contest going with us, to see how many people they can get to do book vs. magazine publishing. Markus definitely helped out Libby’s (books) case!

Check out what I did in previous weeks:

Today in lieu of a real post I thought that I would give you guys a taste of what I’ve been learning in my NYU Summer Publishing Institute. I couldn’t think of a better way to share than with a really amazing video from Random House.

The CEO of Random House, Markus Dohle, came to give the keynote address earlier last week and turned my attention to this great series of YouTube videos about publishing. Without any more introduction:

Check out my previous posts about the NYU Summer Publishing Institute:

Last week the NYU Summer Publishing Institute was really intense! Because it was the final week for the magazine section, we had to put together our launch plans and presentations. This meant more than our fair share of late nights and working lunches but it turned out amazingly well! I’ll show you my group’s work in a later post but here’s a recap of how it all happened:

We were in strategy workshops all week which of course sounds far easier than it actually was. Rather than just working within our groups or with professors, every day we had to present our ideas to industry professionals such as Lavinel Savu (Managing Editor at InStyle), Tom O’Quinn (Art Director at Men’s Health) and others. Not only was this intimidating but in many cases it meant we needed to revise large sections of our project mere days before presenting!

In the midst of all of the preparation I managed to snag tickets to Shakespeare in the Park, quite a feat just ask any New Yorker! I was worried to loose a whole night of work but couldn’t pass up the amazing opportunity, plus this year they are performing As You Like It! I spent more than an hour wandering the park looking for the theatre in my work clothes! It was all worth it though. The players were sensational, but what can you expect from a cast that includes Lily Rabe and Oliver Platt? (If you don’t believe me listen to the NYT).

When Thursday finally came I felt ready. Our fashion/beauty magazine was gonna rock their socks. We were up against a tough panel: Brandon Holley (Editor in Chief, Lucky), Matt Sullivan (Web Director, Esquire), Christine Guilfoyle (Publisher, Every Day with Rachael Ray). Though I know we worked our hardest, we didn’t win the competition. However, we did get an award for best app concept! 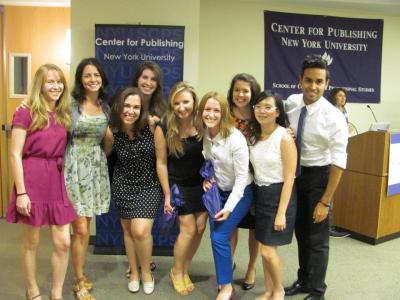 This weekend was the quintessential NYC experience. Saturday morning I went to the Metropolitan Museum of Art to take in the exhibits. Though the layout is very confusing I managed to explore three exhibits that I found particularly thrilling: Schiaparelli & Prada: Impossible Conversations, The Dawn of Egyptian Art, and the Wrightsman Galleries for French Decorative Arts. Vastly different in time and space, the three caught my eye because of their beauty, intelligence and complexity. Schiaparelli & Prada was the perfect balance of beautiful clothes and intelligent dissection. The Dawn of Egyptian Art was a new way to look at my love of Egyptian burial rites. The French Decorative Arts were like Versailles only far less crowded  and,  to a certain extent, more interesting. 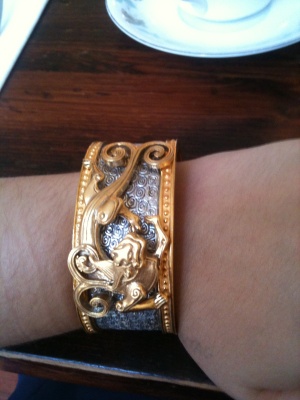 A bracelet that fits my impossibly tiny wrist!

While there I purchased a unique bracelet based on a Tibetan dragon.Three hours later I emerged with a notebook full of observations and a growling stomach.

Alice’s Tea Cup (on 81st) was just the ticket. I was lucky enough to be seated immediately and to get a table right in the window!(People watching in NYC is my not-so-secret hobby.) After pouring over the menu for ages I finally decided on the Breakfast Tea with Anna’s Earl Grey. The food was more than I could eat but I tried my darndest because it was so delicious! 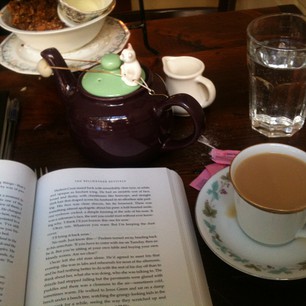 There’s nothing quite like relaxing with a cup of tea and a great book.

Once I tore myself away from my current read, I met up with my roommates for gossip and mimosas at Tonic East. Wonderfully relaxing and the perfect afternoon pick-me-up, Tonic was the motivation I needed to dig in to the job hunt.

Sunday began in much the same way with brunch at the Sunflower Diner. The food was mediocre but the atmosphere was adorable and I saw the most amazing array of New Yorkers! Next up was the mundane task of grocery shopping, jazzed up with the help of my roommate and Trader Joes. There’s nothing like a great grocery to perk you up! Continuing with the adventure, we headed to Central Park for a little reading and a lot of sun.

Everyone enjoying the nice weather.

The perfect weekend ended with a trip to Atlantic Grill. Though we found it while wandering to the subway, I’m glad we stumbled across this gem! The food was divine, better than anything I have had in NYC thus far. I had the salmon and spinach; Lauren had sushi. Afterwards we split chocolate fondue — yum!

I’m only sorry I didn’t get a picture of the fondue!

Check out my other NYC posts: